The festival consisted of 10 different exhibitions with 64 artists from 23 countries in total. Most of the exhibitions were held during September-October; last show ended 4th January 2015 at Tampere Art Museum.

The festival´s main events and Symposium were held 5th -12th Sept. 2014. The symposium consisted of artist talks, portfolio reviews, workshop, studia generalia lectures, festival club as well as photo screenings from other European photo festivals and organizers. The pedagogical program reached 200 participants. In addition of the official Symposium the partners organized sideline program during the exhibitions. 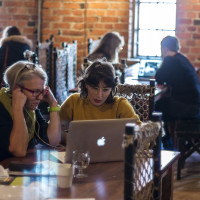 The festival structure is ensured by wide-ranging cooperation

The international Backlight Photo Festival is organized by the Photographic Centre Nykyaika. Festival is held every third year; 2014 was the 10th edition of the triennial. Wide cooperation with various institutions makes it possible for Nykyaika, which is a non-profit organization. Backlight ´14 cooperation partners in 2014 were:

The Festival of Political Photography

Backlight ´14 explored the forces and binds holding societies, communities, families and friends together and apart through photography.